Crossing the Gulf Stream this season felt much less daunting than last: we knew what to expect having crossed twice last year (to and from the Bahamas). After spending about a month making our way around Florida, we sat in Key Largo waiting on a weather window to cross over to the Bahamas. We had enjoyed our time in the Keys, spending Thanksgiving in Islamorada and sampling beer at the Islamorada Beer Company. It was early December and since we were sitting smack in the middle of winter, cold fronts were making appearances pretty often. We needed to wait until the weather cooperated before leaving the protection of the ICW at Key Biscayne.

Taking lessons learned from last year, this year we decided to cross from Key Biscayne, bypass Bimini and head straight to Great Harbor in the Berry Islands (a total of about 125 nautical miles). We didn’t particularly like the anchoring options in Bimini (we ended up taking a marina last year) so we decided to skip it altogether.

When to cross the Gulf Stream? The Gulf Stream is an ocean current running south to north off the coast of Florida (and continues north up along the eastern coastline) at about 2.5 knots. When choosing a weather window to cross, you do not want to cross with a northern component wind (this includes northwest and northeast). When wind opposes current there is rough, choppy seas and if the northern wind is strong enough, “elephants” form. These high, jagged square waves are dangerous. Last year we waited until there was no wind, so that we could motor across in flat, calm water for our first time. This time was different. We watched the weather carefully and saw a window coming in which the winds would be out of the south at about 10-15 knots. 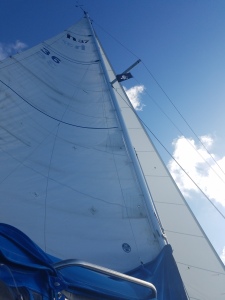 The morning we left Key Biscayne (anchored just outside of No Name Harbor), we were one of about five other boats staged for the crossing. Just as the sun rose, we got underway. The first hour or so was a bit rough. Until a few miles out, the water was shallow (under 100 feet) and the waves were choppy. Once we crossed into deeper water, the seas seemed to become less confused and we rode up and down waves smoothly. We shut the diesel off after the first hour or so. After that, we sailed the next 24 hours on the same tack! 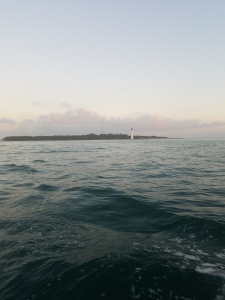 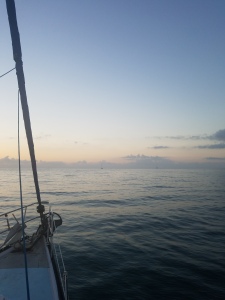 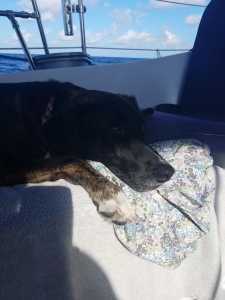 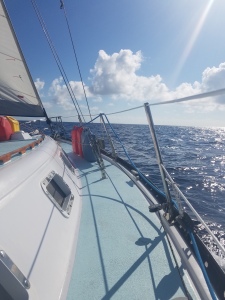 Once the sun fully rose that morning, the skies were clear and blue. It was a beautiful day. We moved along between five and six knots. The flow of the Gulf Stream would eventually move us north on our easterly heading. That worked out perfectly for us since we were not aiming straight for Bimini. We aimed for North Rock, a waypoint north of the Bimini islands. The deep blue color of the water is breathtaking, seemingly becoming more and more blue as the water depth increased. Our charts indicate the deepest water was over 3,000 feet (of course our depth display cannot read such great depths). 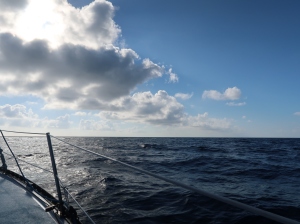 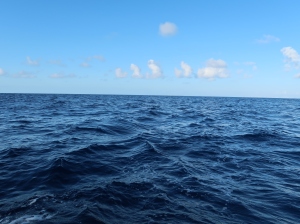 We crossed from the Atlantic onto the Bahama bank after about ten hours, just as the sun began to set. We had just enough daylight to notice the change in water color as the depth became shallower, from 2,000 feet, to 500, and settling around 30 feet. We were now sailing over the crystal-clear blue water of the Bahamas. Two pods of dolphin joined us before dark. First, what we believe were a pod of striped dolphin darted back and forth between the port and starboard side. This group was fast, agile, and playful. Within ten minutes of the first pod leaving us, a group of bottlenose dolphin joined us. Bottlenose dolphins, who seemed always to be with us in Florida, found us in the Bahamas! These dolphins were much larger than the first group, moving gracefully alongside us. 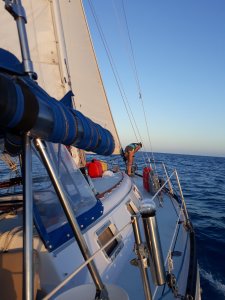 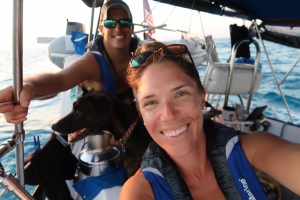 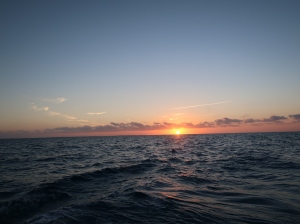 Once dark settled in, we had about seventy miles before reaching Great Harbor. We took shifts overnight, keeping on course and monitoring the radar to track passing vessels. The night was uneventful, but we were thankful when the sky began to lighten. Although we took shifts and napped when we were off-duty, we were tired and ready to be still. We had also hand steered the entire way (our autopilot failed soon after we left Punta Gorda).

We arrived in Great Harbor around 8:00 am, 25 hours after leaving Key Biscayne. At 8:05, I radioed the marina…thankfully they answered and were open! As soon as we tied off to the dock at the marina, we plugged in to shore power (it was hot!) and turned on the AC…next, we slept! 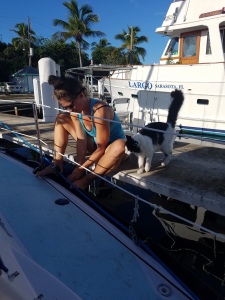 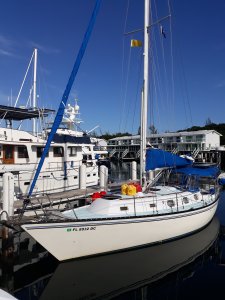