We pulled into our slip at Palm Cay Marina just in time before an afternoon thunderstorm began. We were happy to see the familiar faces of SV Elysian and thankful that they were willing to catch lines for us as we docked. I don’t think any sailors turn down extra hands for catching lines when docking!

The marina had just reduced their rates for the summer season, so we decided to stay a total of four nights, rather than two, like we had planned. Our four days were spent enjoying land-comforts…laundry, hot showers, wi-fi, and grocery stores. A full-size grocery store was built since our last visit, just a mile or so down the road, so we walked and brought our rolly-cart to carry groceries. We reprovisioned on essentials and bought a few special items…deli subs, Alexia sweet potato fries, and a few cartons of strawberries.

Back on solid ground, I decided to give running a go for the first time in months. I hadn’t run since we left home back in February. Early on the second morning in Nassau, I dug out my running shoes and went for it. My old pace (8:35/mi) was long gone, but I was shooting to keep in under 10-minute miles…I succeeded, barely, at 9:45/mile. I ran a total of four miles over our stay at Palm Cay…my legs were like jello!

We walked the dogs around the marina…Ginnie wasn’t so sure what the leashes were all about since she’s gotten used to being off-leash, but both dogs seemed to enjoy the grass! 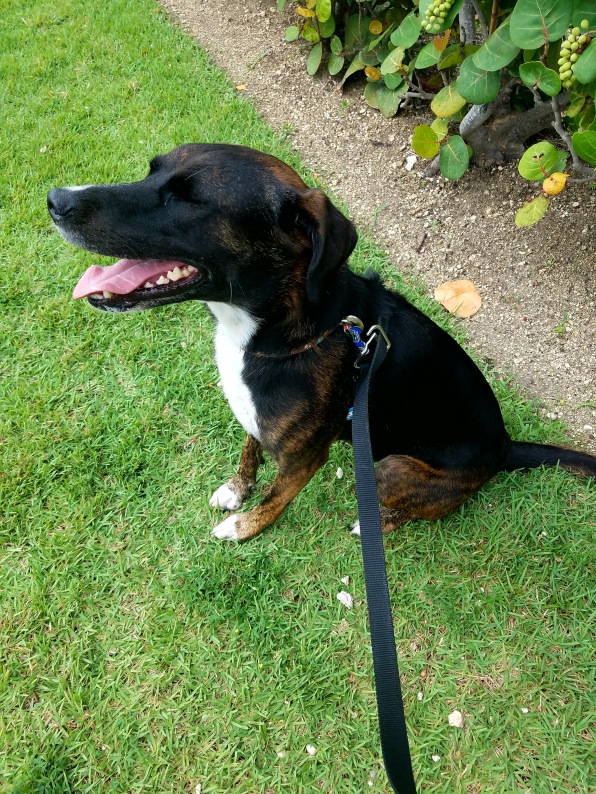 Troy and I made one trip into Nassau by taxi. We picked up a new handheld radio and the Near Bahamas Explore Chartbook. Since we knew exactly what we needed and from only one store, our taxi driver agreed to wait for us…he was so nice and friendly…telling us all about his life growing up in the Bahamas.

While we had wi-fi, I downloaded the CBP ROAM app in preparation for our arrival in the states. This app is very new and after reading a description about it from the Boat Galley blog, I decided to give it a try. This app will allow us to check-in to the United States without having to go to a face-to-face appointment with Customs and Border Patrol. I entered our passport information and pictures along with our boat information. When we arrive in the states, to check-in, all I would need to do is complete a facetime appointment with a Customs and Border Patrol officer.

After our fourth night, we woke up and left early, to begin the trip 50 miles north to the Berry Islands. The winds were a bit stronger than we expected as we moved around New Providence; this made the first leg pretty choppy. Soon, we were aiming for Little Harbor and Devil’s Cay in calmer conditions. We realized, early on, that we were in for a stormy trip. We watched as dark clouds built up around us in the distance. Lightning was everywhere…but luckily nothing too close. It still made me nervous; as we got further and further offshore, the amount of lightning strikes seemed to increase. We got rain on and off our whole trip, but with the rain, came no wind. We moved SO SLOW. Eventually, we motored, being chased by storm cells in every direction. 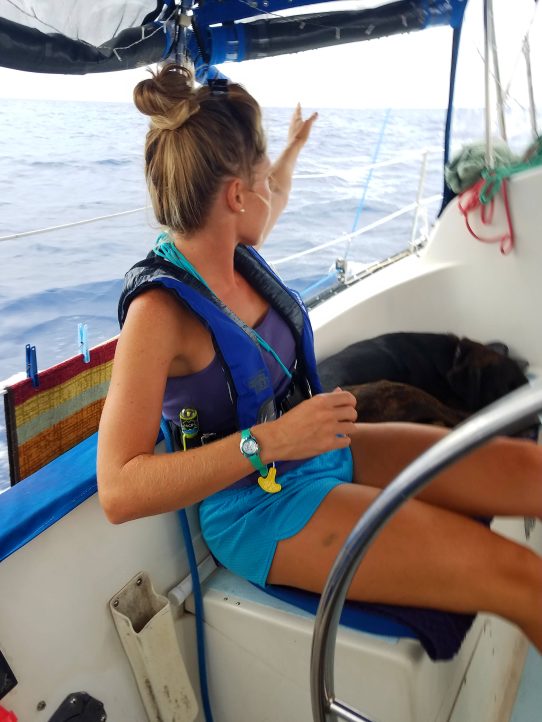 Finally, we could see land as we approached the Berries, but we still had a ways to go. The cockpit was soaked from rain blowing in from the sides. Everything was wet, but at least the lightning was diminishing. Soon, thankfully, the storms subsided, and we made it through the cut to the shallow, protected interior of the islands. Once inside, it’s as if we’re in a sanctuary…we got the same feeling after surfing down waves for our first arrival here. We anchored behind Fowl Cay for our first night and then moved over to our favorite spot, Devil’s Cay, the next morning on a rising tide. The interior of the Berry Islands are shallow, so we moved over to our new spot when we had more water under the keel. We dropped anchor in a sandy patch among the seagrass about halfway down the cay. 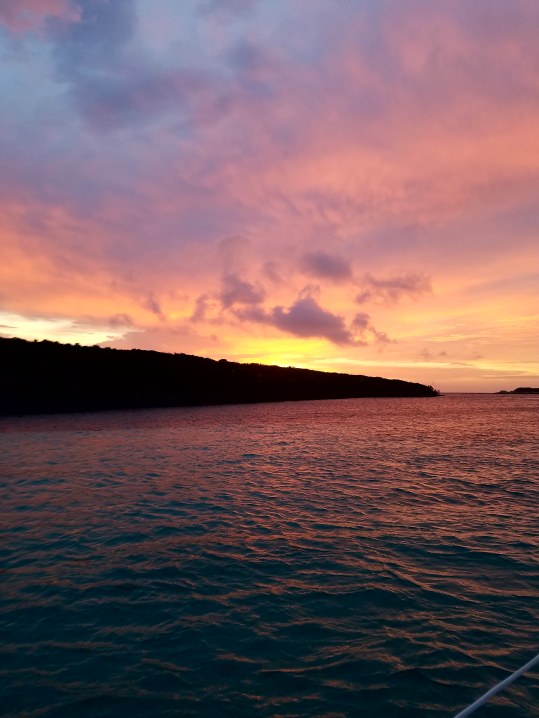 Calm, protected, and HOT. We were really starting to feel the heat. With little breeze, we cooled off in the water many times throughout the day. Flip-flop hiking and dinghy exploring filled up our itinerary. The views are unspoiled…sugary sand, rocks and grasses, surrounded by blue crystal-clear water…perfection! 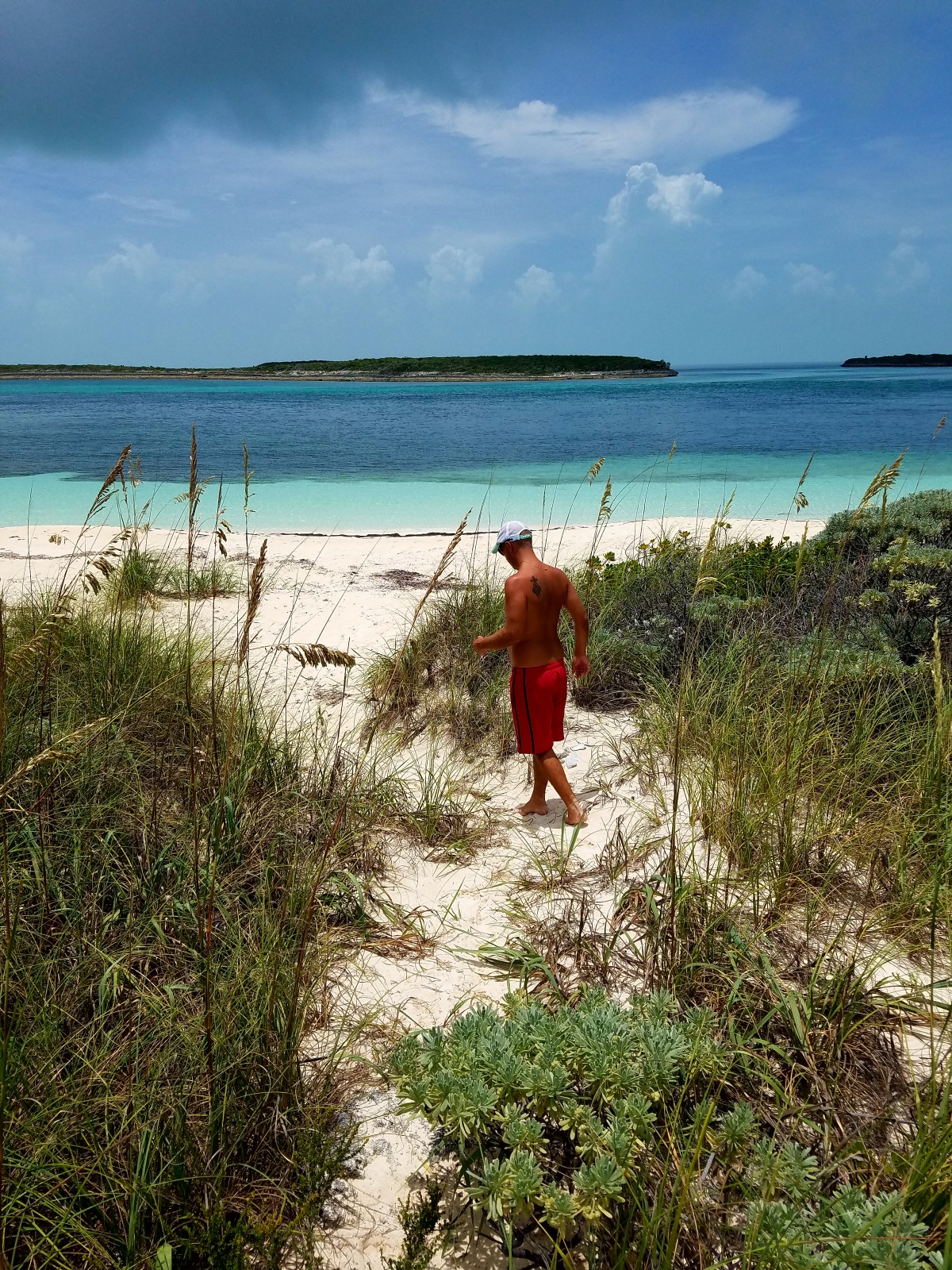 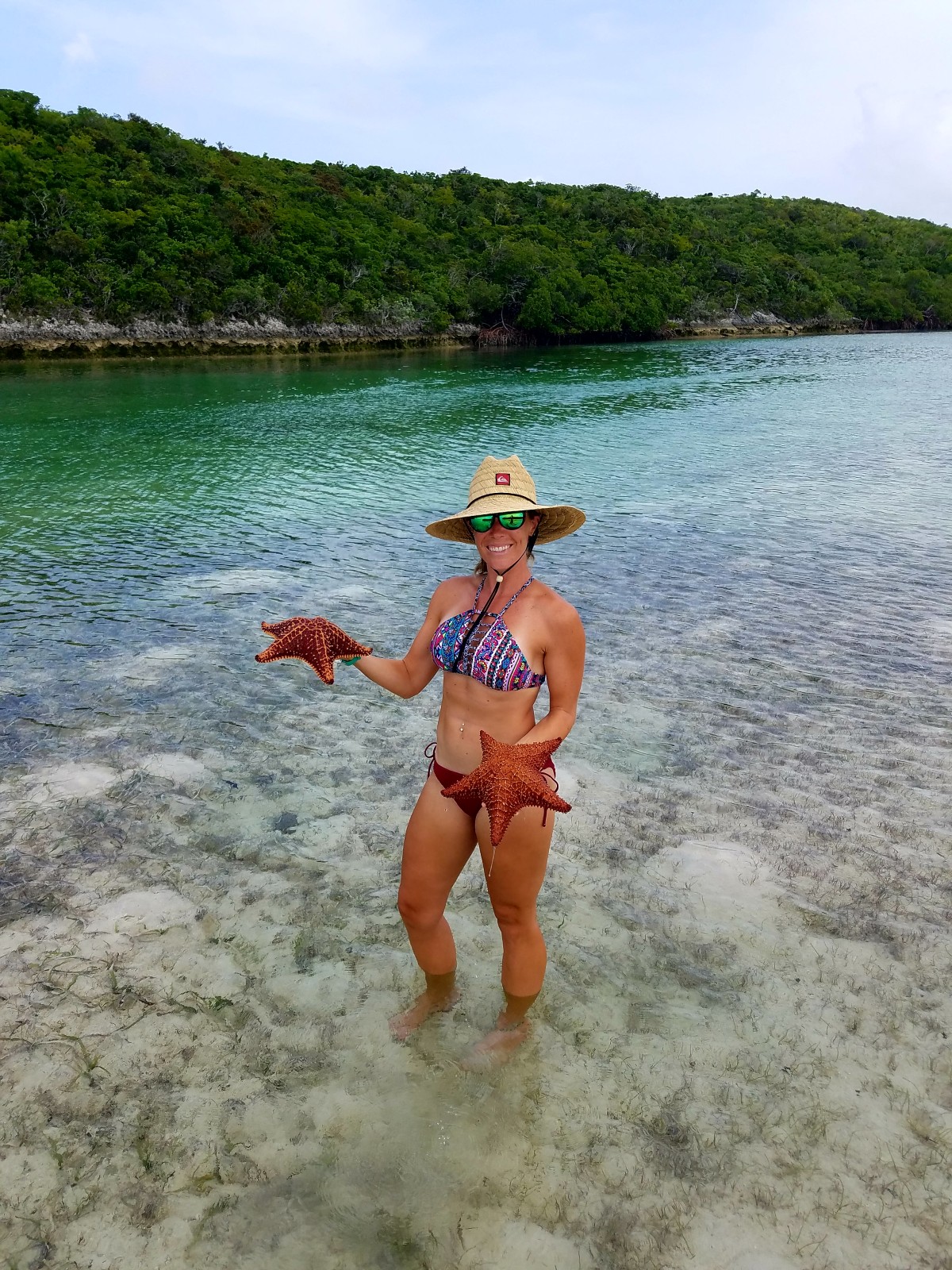 Ginnie was lucky enough to score an evening dinghy ride and I finally took a video. You can see her pure joy. I’m telling you, there is nothing that makes this dog happier than perching herself on the front of the dinghy…the faster, the better!

At this point in our trip, we were starting to make plans for our arrival in the United States. It is hard to believe our time in the Bahamas was coming to an end. It had been over four months since we were in Florida. At this point, we planned on moving from Devil’s Cay to Great Harbor Cay in the Berry Islands. From there, we’d make an overnight trip to Bimini and wait for a weather window to cross back over to Miami. Our weather information from Chris Parker told us that we’d be in for light and variable winds…more motoring, most likely. So, with that knowledge, we made our way out and around towards Great Harbor.