Just 14 miles north of Staniel Cay is the Exuma Cays Land and Sea Park. Waiting for us there are restful nights of sleep because, well…mooring balls. We made the short hop to Cambridge Cay. On our way, I pulled lines out of the lazarette and set them up on deck so we were ready to grab a mooring. We have a few specific lines that we use for moorings, that we’ve equipped with some homemade chafe protection (aka cut up water hose). 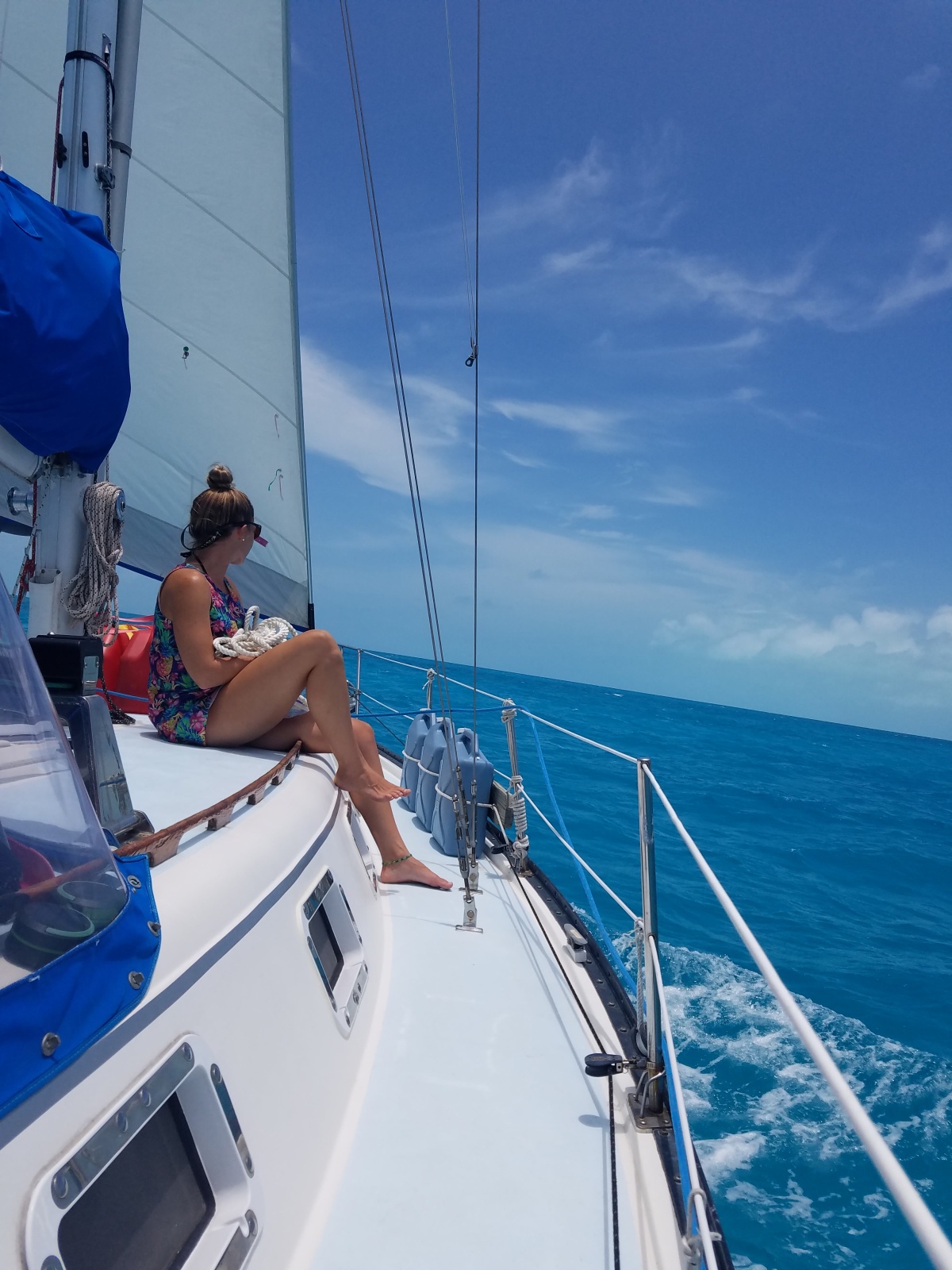 From the southern end of the cay, we carefully approach the mooring field. The entrance narrows with shallows and rocks on either side. We come uncomfortably close to the rocks on our starboard, but that’s where the deepest water is. It’s a funny thing when we’re purposely bringing our boat that close to sharp, jagged rocks, but we made it through with no problem. 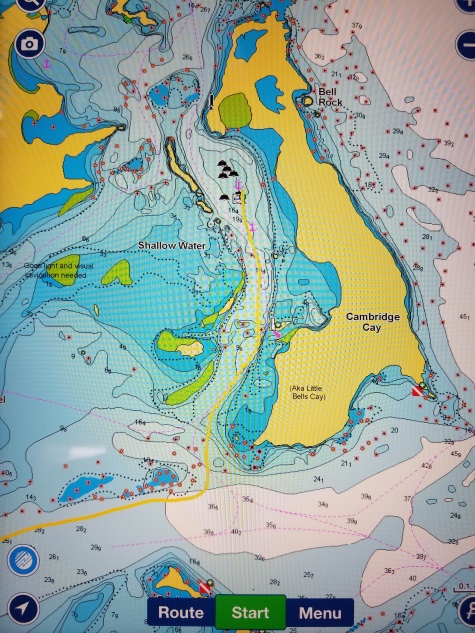 We stayed a few days in the park, and like the last few anchorages, the mooring field was much less crowded than our visit back at the end of March. Then, all mooring balls were in use (about a dozen of them, plus some vessels anchored) and now no more than five other boats were moored.

We spent most of our time in the water snorkeling and exploring the nearby cays. Our dinghy got a workout here. From the mooring field, we traveled to O’brien Cay, Soldier Cay, Halls Pond Cay, and Little Halls Pond (Johnny Depp’s Island). One of our favorite things to do is exploring by dinghy. We love finding hidden coves, sandbars, and snorkel spots.

Along the south side of O’brien Cay, we slowed the dinghy down, found several coral heads along the island, and decided to drift dive, letting the current carry us as we swam. We like to snorkel mid-day, if the weather is right. Because the sun is straight overhead, the visibility is best. The sun illuminates the water and creates spotlights over the coral. The colors are unreal! I know I’ve said it before, but the water is crystal-clear, like a swimming pool. We’re so lucky we get to live in and explore such an amazing place!

We made two trips to “The Aquarium”. This tiny rock island sits between O’Brien Cay and Soldier Cay. Above the waterline, it looks like any other rock…but below is a water wonderland, full of bright coral and endless amounts of sea life. 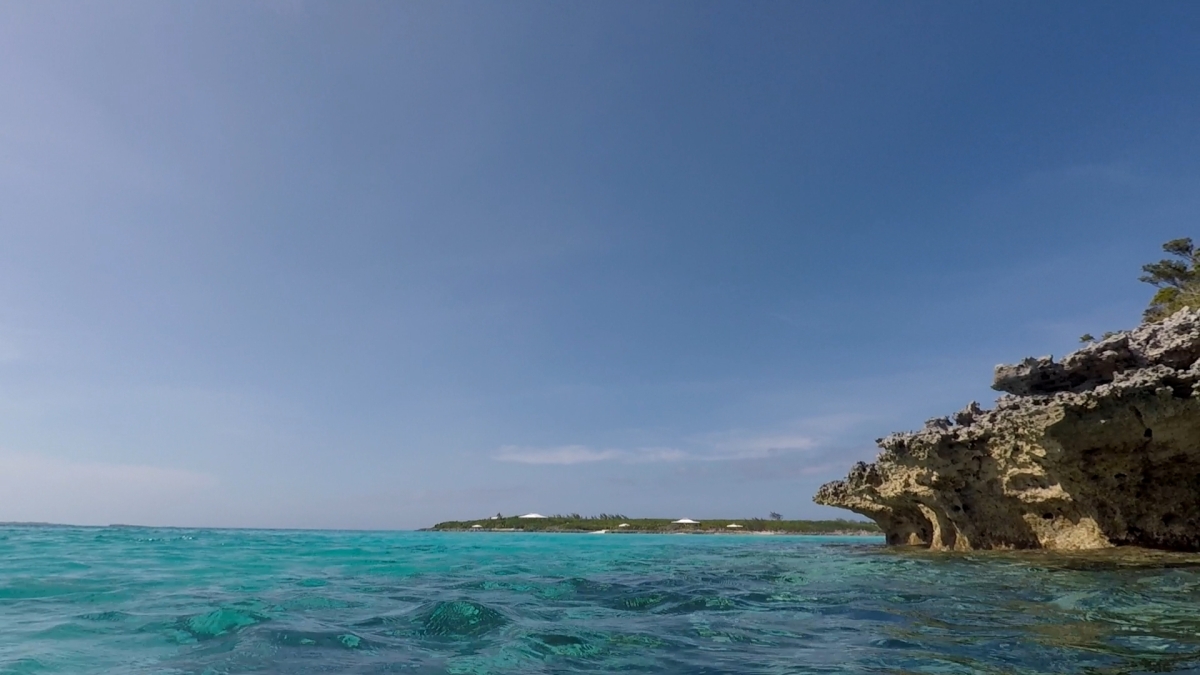 We tied up to the dinghy moorings and hopped off the dinghy. We are instantly surrounded by fish. This trip, I brought a few Ritz crackers to crumble up for fish food. These little guys aren’t shy! 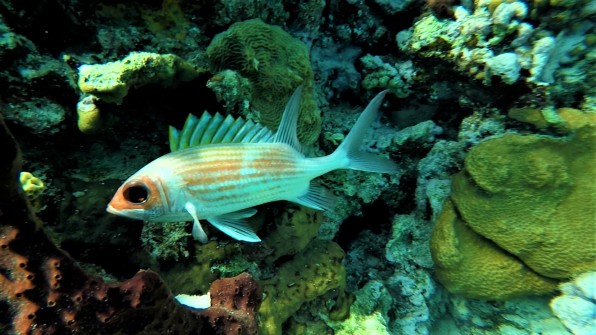 Since we arrived at slack tide, the current is almost nonexistent. We leisurely made our way around the entire perimeter of the island. Occasionally, Troy and I would have to pause to find each other, we often slowed down to get closer looks at all the tropical fish. Out a way from the aquarium, Troy spotted a group of ocean triggerfish and a sea turtle and snorkeled to check them out. I stayed, poking my nose in the nooks and crannies of the coral, seeing what I could find.

Afterwards, we motored over and took a slow stroll around Johnny Depp’s Island, Little Hall’s Pond Cay, just west of O’brien Cay. Unfortunately, we had no star-sightings! We also made another trip to the plane wreck nearby. Out in the open, away from any island, we picked up the dinghy mooring and snorkeled the wreck. I spotted a few barracuda lurking nearby… I kept my eye on them! I think my fingers stayed permanently pruned, but I never get tired of being in the water!

After three days, we headed 12 miles north to Warderick Wells, the headquarters of the Exuma Cays Land and Sea Park. We snagged a mooring ball in the Emerald Rock mooring field…Salty Tails was the only boat when we arrived! We expected to have fewer neighbors at this point in the season, it was becoming a common theme.

We checked on our sign at the top of Boo Boo Hill…it still looked great! I was a little nervous because the salty air and relentless wind is so rough on things…it was a little faded, but intact! The hike to and from Boo Boo Hill is a short one, but the heat had really ramped up and Troy and I were both sweating, A LOT!

The next day, was a little dreary so Troy decided to take care of some dinghy motor maintenance. He installed a new water pump and replaced the lower unit oil. For Troy, these tasks are extremely simple under normal circumstances, like in a garage. BUT, the winds picked up a little out of the west and we were rocking. Imagine lifting an awkwardly shaped 60-pound weight up from the dinghy into the back of the sailboat…both of which are moving up and down with the waves. Sheesh! Thank goodness we didn’t drop it! It was a messy job, and somehow, we both ended up oil-stained, but the dinghy had fresh oil by the time he finished! 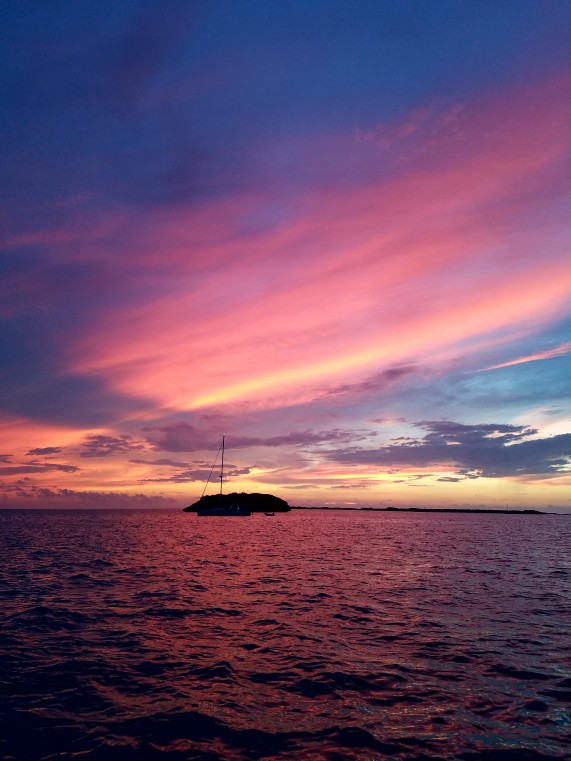 We enjoyed one of the most spectacular sunsets of our trip on our last night at Warderick Wells. The sky shone every color of pink, orange, and blue…breathtaking! In the morning, we’d be heading to Hawksbill Cay.