We arrived back at Little Farmer’s Cay after motor-sailing north from George Town. Seas were fairly calm with extremely light winds…it wasn’t as hot as our trip down, so we were thankful for that. 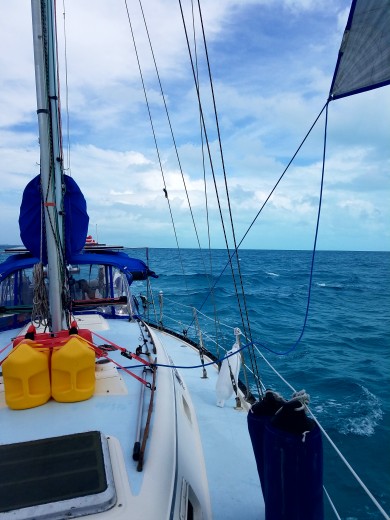 After roughly seven hours, we anchored in the same spot as last…strong current, but excellent holding in between Little Farmers Cay and Great Guana Cay, right out in front of Little Farmers Yacht Club. Summer was approaching: we had a few strong squalls over the few days we stayed. Riding out the storms proved extra interesting since current controlled the boat’s direction rather than the wind. When the rain and winds passed through, the cockpit often got soaked because winds came from the sides or behind.

We heard from other cruisers that there was a population of sea turtles that lived in the harbor of Little Farmers Cay. We decided to scope it out and took our GoPro with us in the dinghy, hoping to get some underwater footage. The day prior, we noticed a handful of dime sized jellyfish passing the boat. On this day, we stumbled upon several huge masses of the jellyfish near the shore. At first, it looked like a bunch of seaweed floating along the top of the water. Upon further inspection, we discovered that we found hundreds of thousands of the little jellyfish floating in the water.

Although the water was only five or so feet deep and crystal clear, there were so many jellyfish in spots that you couldn’t see through to the bottom. And that’s where we found the sea turtles. It was as if we stumbled upon a jellyfish buffet. We didn’t need to enter the harbor to see the turtles, they swam among the jellyfish and coral. We got some great GoPro footage and the turtles didn’t seem to mind our company. 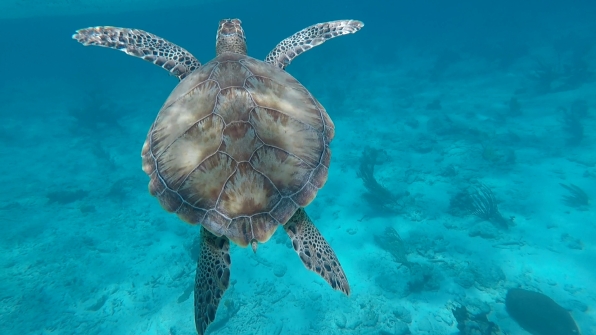 After a few days, we headed back to our second home, aka Black Point! We were excited to head back and had a fun 10 mile trip north under sail. The winds were pretty piped up from the southeast. In about 15 knots of wind with a following sea, we got up to 7.5 knots…with just the headsail! Troy and I shared the helm this trip…I was really starting to feel more comfortable at the helm while under sail.

And after a few hours, we were approaching Black Point, this time from the south. The winds really picked up, blowing over 20 knots…it felt like we were flying! This time, for two reasons, we could tell the cruising season was coming to an end. First, there were fewer boats than our first time in the anchorage. Many people had probably already headed back to the states. And secondly, the spring/summer weather pattern of thunderstorms was obvious. During our second day, we had another day of scattered showers. Sometimes these showers brought along wind, and others just rain. 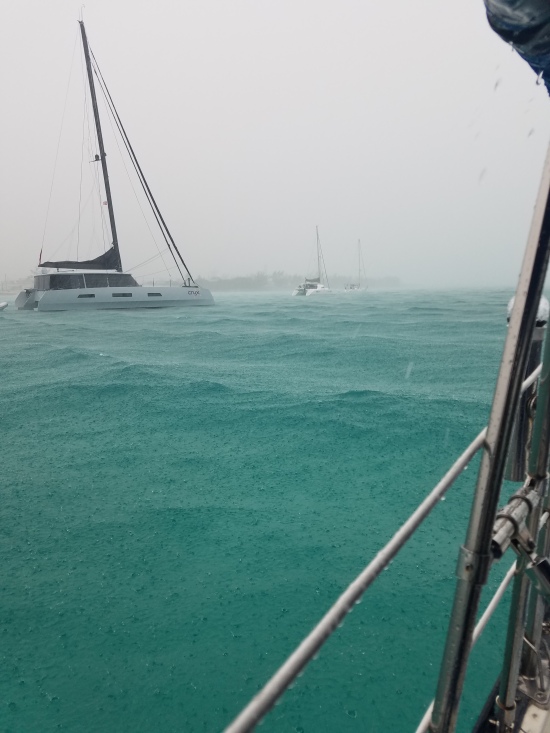 Black Point meant we were going to have a chance to do laundry…with the best view! While doing laundry, we met another couple about our age, Rylie and Allie on SV Generations. We got to talking and became fast friends! We decided to meet up at Scorpio’s (for 2 for 1 rum punches, of course). Cruisers gathered at Scorprio’s, the nightly ritual. After most headed back to their boats, Troy, Rylie, Allie, and myself decided to stay and hang out with the locals. Many rum punches were consumed…along with sharing stories and plenty of dancing. I do not dance in public…but I did that night. 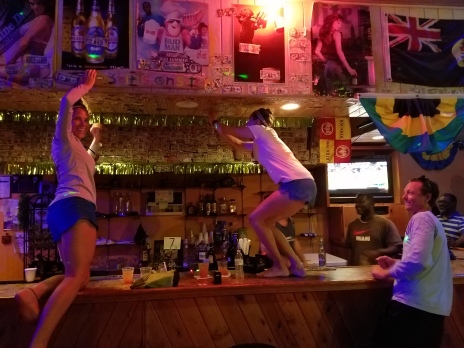 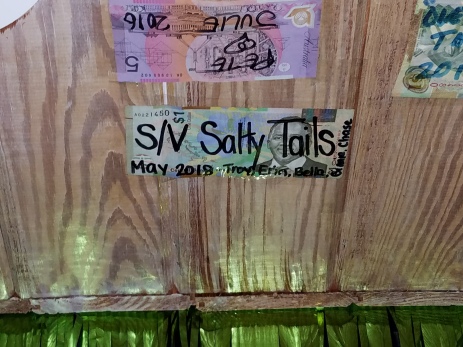 We decorated a few dollar bills to hang above the bar, leaving our “We’ve been here” mark. We climbed up and stuck them on the ceiling…we’ll definitely check to see if they’re still there next year! That was a pretty late night…even the dogs slept in the next morning.

Over the next week or so, we hiked the island and snorkeled several places nearby. The reefs and coral heads in the area are healthy and thriving. Most are colorful and teeming with fish and sea life. We spent most of our time snorkeling just outside and south of the Black Point anchorage. These spots aren’t marked on any of our guides, we found them just by dinghying (I may have just made that word up) around and dropping the anchor when we found a spot with a few coral heads. The water is warming up…each day it gets easier and easier to hop in. 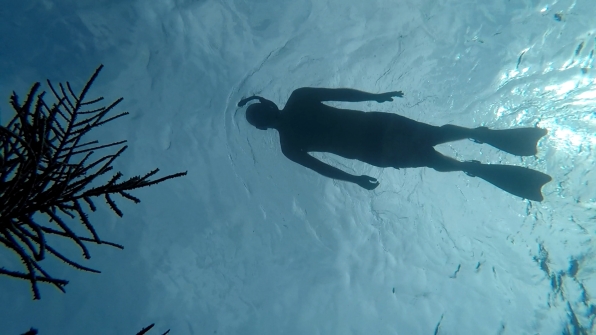 When I wrote about Black Point last, I mentioned that our favorite part of Black Point was the people…the feeling has now increased exponentially. From the late nights hanging out at Scorprio’s to the kids climbing the ladders on the dock to the simple daily interactions in the street, the people of Black Point make you feel like you’re at home.
A prime example of their hospitality was when we met Bread Boi, owner of several vacation rental homes. He knew we weren’t ready to leave Black Point, but we had a package to pick up at Staniel Cay, a few islands north. Rather than charging us to rent one of his Boston Whaler skiffs, he let us borrow it for the afternoon! We just had to replace the gas we used. We were blown away by his generosity…and frankly his trust in letting four strangers (Allie and Rylie came with us for a day trip, of course) take his boat.
When we left Black Point in the skiff, the four of us were laughing when the boat jumped up out of the water. The 115hp engine moved the skiff A LOT faster than the four of us had gotten used to in our sailboats. We returned after several hours with our package. My mom had sent us a care package with some things we were missing and couldn’t get here in the Bahamas…protein bars, Crystal Light, 3M boat wax, and the icing on the cake…an XM satellite radio adapter for our stereo.

We spent a total of over 25 days at Black Point…and we loved every one of them! We made new friends and slowed down, island style. We can’t wait to reach Black Point next year.